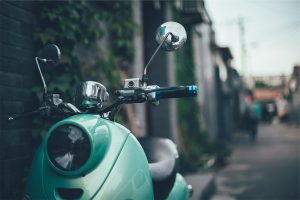 A recent report by the New York Daily News concerning injuries sustained by the famous actor, George Clooney, serves as a perfect illustration for the types of accidents that can occur with vehicles other than a car.  According to the article, Mr. Clooney was operating his scooter in Sardinia and was on his way to a movie set.   A collision occurred between his scooter and another motor vehicle – in this case, a car.  As a result, Mr. Clooney was hospitalized with injuries, the extent of which remain undetermined.

In order to operate a scooter in New York,  a person must follow the same requirements as a New York motorcycle license.  In other words, a full registration is required and the driver must have a valid Class 1 or Class M/MJ driver’s license to operate a scooter.  With regards to Mr. Clooney’s accident, the laws in Sardinia would apply regarding the operation of a motorized scooter.

Another aspect of the law which requires legal analysis is whether scooter operation requires the operator to wear a helmet.  This is a major focus of motorcycle litigation as the requirements vary greatly depending upon the jurisdiction.  New York is a jurisdiction which requires helmets for operators of a vehicle such as a motorized scooter.  The news report did not indicate whether Mr. Clooney was wearing a helmet at the time of his accident nor did it indicate whether a helmet was required under Sardinian law.  Nonetheless, the report presents information which is valuable for a reasoned discussion of blame under the circumstances.

Too often, a knee-jerk reaction of many is to automatically blame the victim who is injured in the circumstance where they are not wearing a helmet.  This is known, under New York law, as comparative negligence, which is frequently used to reduce or even eliminate a recovery on behalf of an injured party.  However, this should not be the end of the legal inquiry as such an analysis is entirely superficial.  Specifically, in the case involving Mr. Clooney, it was reported that he injured his arm and leg.  Obviously, the question of whether he was wearing a helmet or not would be irrelevant unless he sustained a head-injury.

These are just brief highlights of what would be a lengthy legal analysis under New York law in the case where a motorized scooter is involved in an accident with another motor vehicle.