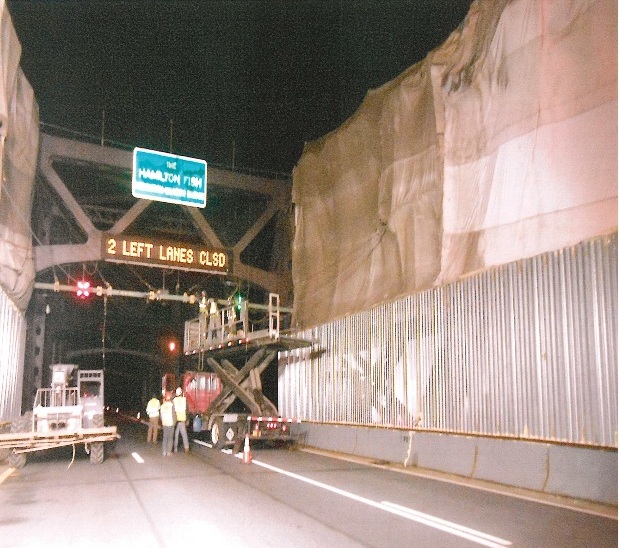 Our partner, Jonny Kool, recently settled a New York State Labor Law case on behalf of a 34-year old bridge painter from Orange County who was seriously injured while painting the Newbugh-Beacon Bridge. On November 8, 2013, the plaintiff was working as a bridge painter for Kiska Construction, Inc. which was hired by defendant New York State Bridge Authority in the capacity of general contractor to rehabilitate the Newburgh-Beacon Bridge (North Span) located over the Hudson River between the cities of Newburgh and Beacon, County of Orange, City and State of New York.

On the night of the accident , at about 11:00 p.m., the plaintiff was standing on the platform of a scissor-lift truck. The lift truck stopped and its scissor lift platform was elevated off the chassis into working position at a significant height, about 15 to 20 feet above the roadway, with its rear gate in the down/open position. Without any signal from anyone, the lift truck operator put the lift truck into gear and drove forward. The unexpected movement of the truck caused the raised scissor lift platform to bounce sharply. The workers standing on the elevated platform lost their balance. Plaintiff, who was positioned towards the back of the elevated lift, about four feet from the gate, lost his footing and fell backwards as the lift truck drove out from underneath him. The lift truck did not stop and continued forward. He rolled off the elevated lift platform and through the open rear gate. He then fell down 15 to 20 feet to the roadway below. He struck the roadway surface sustaining severe injuries.

The plaintiff sustained a complex, comminuted fracture to his elbow requiring emergency surgery as well as a fractured pelvis. He has not been able to work as a bridge painter since the time of the accident.

The Orange County Supreme Court grand plaintiff’s motion for Summary Judgment pursuant to New York State Labor Law 240(1) and set this matter don for a trial on damages. Prior to the trial, Mr. Kool was able to negotiate the settlement in the amount of $1,7 Million.

The partners and staff of Queller, Fisher, Washor Fuchs & Kool, LLP congratulate our partner, Jonny Kool, on this incredible result.

While grounds for compensation under New York Labor Laws 240(1) and 241(6) may seem obvious to injured workers, construction companies and contractors often disagree and are willing to fight claims in court. Property owners and construction companies can have vast resources that they are willing to exhaust in order to avoid paying injured workers the compensation they may deserve. As a result, it is important that construction workers who have suffered an on-site injury retain an attorney with experience handling law suits relating to Labor Laws 240(1) and 241(6). At Queller, Fisher, Washor, Fuchs & Kool, our New York construction accident lawyers have a track record of success handling New York labor law lawsuits. Our firm’s resources and experience allow us to successfully combat property owners, construction companies, and insurance companies in court. We have secured numerous favorable verdicts and settlements over the years, many of which have been greater than $1 million.

Have you suffered an injury while working at a construction site? Do you believe you have a lawsuit under New York Labor Law 240(1) or 241(6)? If so, call 212-406-1700 or contact us online for a free consultation. Queller, Fisher, Washor, Fuchs & Kool will review your claim to see how they may be able to help you.